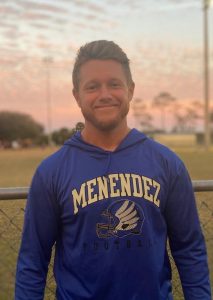 Coach Potak became the Head Coach of Menendez Football in 2021. He has been a part of the Menendez football community since 2006. As an assistant coach, Coach Potak was part of the Falcons first varsity winning season in school history (2007). As a Coordinator, Coach Potak helped Menendez reach their first playoff appearance in school history (2008, 2009). Matt was also on the Falcon staff in 2018-19, where he was the Defensive Backs Coach and scouting coordinator. Coach Potak led the Falcons feeder school, Gamble Rogers Middle School, to three SJMSAA Championships and a 60-16 record from 2014-2020.  Coach Potak is also the Head Boys Weightlifting Coach. 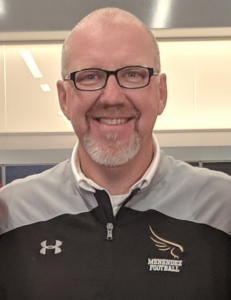 Coach De Vos began his coaching career in 1998 and joined the Menendez staff in the spring of 2016.  He is an outstanding role model and coach in our program who works tirelessly for our kids and prepares them for life both on and off the field.  Coach De Vos will continue his role as Director of Football Operations and Running Backs Coach.  Coach De Vos will also assist us as the Director of Leadership and Community Involvement, which teaches our kids to give back to the community.  He is also Director of Basketball Operations/Assistant Boys Basketball Coach and Assistant Boys Weightlifting Coach.  Coach De Vos is a USMC Veteran. 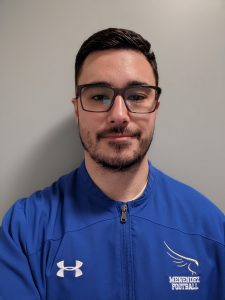 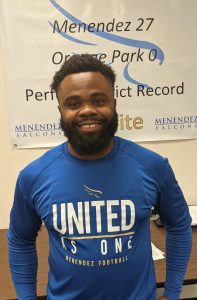 Coach Coleman will help assist Coach Babineau on the offensive side of the ball. This will be Tyler’s second season with Menendez. Coach Coleman will help with Coordinating the Run Game. We are very excited to have Coach Coleman back at home. Tyler has coached at many schools in the area. He is also a PMHS graduate and played collegiate football at Edward Waters College. Tyler helped lead Menendez to their first winning season back in 2007. He has already coached many of our current players from his coaching days at GRMS.  Coach Coleman is also an Assistant Track Coach. 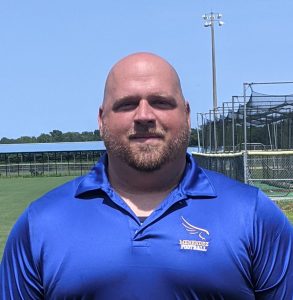 Coach King joined the coaching staff in June 2021.  He will begin his second season with the Falcons. He has been a youth sports coach for the past seven years.  From football to basketball Coach King has coached them all.  He has coached football for four years, soccer for four years, along with basketball and baseball.  Currently, Coach King is the Offensive line and Defensive line coach for Gamble Rogers Middle School 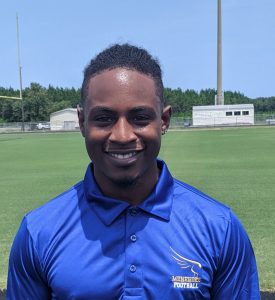 Coach Davis-Welch begins his second season with the Falcons,  He moves into an expanded role as Passing Game Coordinator and JV Offensive Coordinator. A native of Camden, New Jersey, Marquise Davis-Welch is a first year offensive coach.  Coach Davis graduated from Nease High School where his love for football continuously grew.  He attended University of Alabama at Birmingham, where he played cornerback.  Davis is a proud mentor for the youth at the St. Augustine Boys and Girls Club and also works for the Police Athletic League. 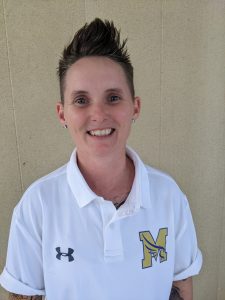 2022 will be Coach Bell’s first season with the Falcons football team. She helps assist with our varsity receivers. Her football coaching career began with St. John’s PAL Youth Tackle League in 2019 which led to coaching with SJMSAA for three years coaching skills positions and special teams coach. In the 2020-2021 season she was the offensive coordinator at Palm Valley Academy. Coach Bell plays professional women’s tackle football in the WNFC for the Florida Avengers out of Jacksonville, Florida as a wide receiver and free safety. She is also a military veteran of the United States Army. Coach Bell continues her work with the players off the field as a social studies teacher at Pedro Menendez High School.

Coach Trey was brought onto Pedro Menendez in the 2022 season to coach the Junior Varsity Wide Receivers and Tight Ends. Now he will also be okay calling for the JV Team. Trey brings coaching and play calling experience from Gamble Rogers Middle School where he is the Offensive Coordinator. Since the age of 16 Trey has been a part of the community coaching football, both tackle and flag. He is excited to grow as a position coach and coordinator with his alma maters.

Coach Ray will begin his second season as defensive coordinator. Coach Ray has done a tremendous job with our Falcons since his arrival in 2019. Coach Ray’s philosophy contributed to an amazing defensive performance in 2021. The Falcons statistically had one of their best defenses in school history. His leadership helped Menendez win a 2019 District Championship as well as two playoff wins in 2020. We are very happy to have him back. Coach Ray is also the Head Track and Field coach at Menendez.

Coach Leonard Allen is in his second year coaching at Menendez.  A native of Chiefland, FL., Coach Allen has coached youth sports for many years, specifically flag football, basketball and baseball.

In his spare time Coach Allen plays linebacker and is a captain for a local semi pro team.  He will be assisting with linebackers and secondary at the Junior Varsity and Varsity level.

Coach Allen is a SSgt in the US Army.

Coach Williams brings energy and passion to the Falcons. Coach Williams was an All-County selection during the 2017 season while playing for the Falcons.  As a player, Marquel helped lead the Falcons to their first football playoff win in 2017. Coach Williams is in his second season as defensive line coach and head JV coach. He is a young coach with great potential and we are very proud of him. He’s an alumni and a leader! 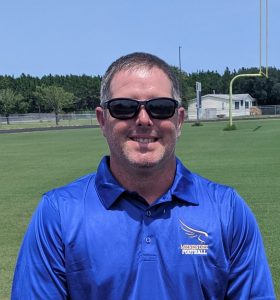 Coach Brubaker grew up in the South Saint John’s County area and graduated from Menendez in 2005.  Coach Brubaker played for the Falcons during the inaugural years of the program. This will be his second season as Defensive Backs coach and JV Defensive Coordinator. Coach Brubaker also coached at the Falcons feeder school, Gamble Rogers. Coach Brubaker coordinated the Stingray defense and helped lead them to a 9-0 SJMSAA Championship season in 2020. 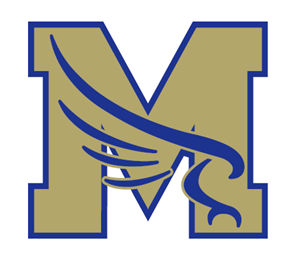